"You and Me at Bike Shed Theatre

By turns tender character study and surreal tragi-comedy.
Whether it’s a positive relationship or one charged with enmity, no one but a sibling has the depth of knowledge and the special kind of persistence to incite rage and love in equal measure, often inside the same minute. Imagine spending a lifetime – not just a childhood – in close companionship with that person, and you get near to the peculiarly intense, eccentric existence represented in Little Soldiers Productions’ two-hander You and Me. By turns tender character study and surreal tragi-comedy, You and Me is as much about the power of imagination as it is infirmity and dependence, and although its themes run deep, it wears them lightly enough to create a funny, insightful and poignant piece that hits its marks with precision and intelligence.
Surrounded by cardboard boxes of mysterious origin and destination, two elderly Spanish sisters while away the time winding each other up and musing on the past. As the elder sister, locked into a lifetime of care-taking, Patricia Rodriguez mixes seething resentment and stoical patience, layered beneath the high-handed superiority of the older child. It is only when her younger sister’s (played by Mercè Ribot) advancing dementia traps her in a frenzied cycle of repetition that her tolerance slips.
Rodriguez is an amazing performer, and she beautifully captures the strain of responsibility, while wringing every last drop of humour out of the absurdity of the scenario. A scene in which she conspires with the audience to tease her sister to the point of madness is so well paced, echoing the tensions of family life and the necessity of laughing in the face of inevitable decrepitude – a theme that recurs throughout the piece.
And although the pair utterly convince as shuffling old dames, there are moments in which the characters leap out of their infirmity to recreate a memory or a fantasy, eloquently expressing the notion that we all carry our younger selves within us as we age; the sudden slippage into triumphantly ebullient dance routines captures this beautifully. Similarly, a scene in which Rodriguez’s character imagines her own death, from the mortician’s table through to the funeral procession – the ignominy of being carried in her casket by pallbearers of different heights – and finally the performance of the mourners, is an outstanding piece of physical theatre.
Particularly affecting are the moments when the sisters’ frustrations with each other – the result of a life spent niggling at grievances, pushing buttons – blow up, and each mollifies the other by crooning melodies in Spanish and Catalan; finding solace in communal songs from their childhood, songs that unite them and remind them of their shared heritage, a bond that goes beyond family connections to deep with their culture.
Although the set is dressed with appurtenances from their lives – a radio here, books there – it is the piles of mysterious boxes that make the starkest impression. Where have they come from and where are they going? Like monuments they should imply permanence, and yet they strongly convey a sense of the precariousness of life; all the while teetering in the background, their contents forgotten, their original purpose lost, these towers merely point to the impermanence of life.
It utterly fills you up, this piece – the power of the performances, the richness of the language – that there’s a fear that it will simply peter out, like a life drifting towards the inevitable, but it ends as triumphantly as it starts, in eccentricity and voices in the darkness."

Comencen les funcions de You and Me 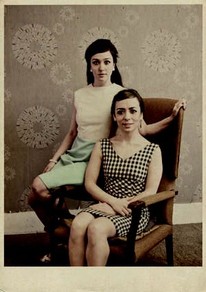 A bitter-sweet physical comedy for everyone who is a day older than yesterday!
Two elderly Spanish sisters in a foreign land live against the backdrop of a battered rug and a mountain of mysterious boxes. They share the intimacy of a life lived together – careering between genuine affection and irritated annoyance. The pair shifts between hilarious defamation, tender reminiscing and pure madness. But amidst an ever-changing reality, is this behaviour just eccentricity or something more destructive?
‘You and Me’ is a touching story with sparkling dialogue and witty observations, that explores old age with humour, imagination and tenderness.
Part of the Theatre Rush & Friends Residency. Single show £10/7, two shows £15/10.

Tickets are available for the following performances: